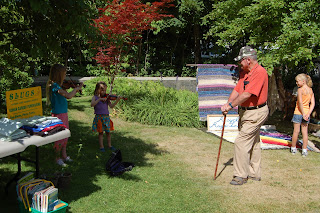 The younger two girls decided to take their turn busking at the market today. The weather was great and they arrived in good time for the busy part of the market. Sophie started with her “set” and got people’s attention. She played for 15 or 20 minutes and took in a lot of cash as people noticed and expressed their appreciation. Then she and Fiona did a set together and that’s when the applause began happening. There were even people besides me taking pictures. Donations continued to pour in. Those girls have serious cuteness when they play together!

Finally Fiona finished up with a set on her own. People are always fascinated by her tiny violin and the big ‘real’ sound that comes out of it. One of the market ladies reminded me that Fiona had begun her busking career three years ago when her siblings were playing together and she was ‘playing along’ on her cardboard violin, even though she wasn’t yet taking lessons. Hard to believe that was three years ago, but then I look at the competent little musician she’s become and of course it’s been three years. 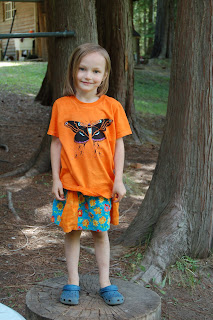 Sophie brought her cash home to apply to her ledger. Money burns a hole in Fiona’s pocket these days, at least if it’s the jingly kind that you can run your fingers through, so afterwards she headed straight for Morgen’s market stall and bought herself a new Inkyspider T-shirt. Her last Inkyspider shirt had long been a favourite but recently met with some sort of mysterious outdoor mishap. So this was a thrilling and timely purchase from the morning’s violin-generated windfall. And hurrah for shopping locally and supporting local artisans.