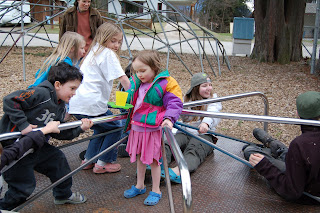 Recently a discussion on a parenting message board got me thinking about what I’ve done to equip my kids to deal with mean-spirited behaviour from other kids. You know, the sort of stuff where some young 5-year-old attacks his playmate with classic threats like “if you don’t give me that, I won’t be your friend” or “oh yeah? well Josh is my best from from now on, not you!”

Having kids who are older now, I wanted to offer some tried-and-true wisdom, but I realized: my kids haven’t really ever learned how to deal with mean-spirited kid behaviour. That sort of stuff tends to spring up when levels of adult supervision are low and the number of kids is high. My kids don’t go to school and don’t end up in a lot of situations where the adult to child ratio is less than 1:4. On the rare occasions where they’ve witnessed a kid saying “I won’t be your friend if you don’t ____” they’ve been stunned. I’ve usually been a witness too, and we’ve talked about it as a family, either afterwards or in a quiet corner of the common space. We’ve talked about how some kids struggle with polite respectful social skills, perhaps because they haven’t been taught how to think about others’ feelings, and that’s kind of been it.

But it’s only happened rarely, the group of kids has usually been small, parents usually present and involved, and it hasn’t gone very far. In essence my kids have avoided the vast bulk of that sort of thing. It’s just how our lives have worked out. We spend time with people we like, and my kids like people who behave respectfully.

So I thought about Noah and Erin, both of whom are sensitive souls, and wondered what they’ve missed out on by not having to learn to deal with that garbage. How do they cope now? Well, the truth of it is that as they get older, people stop shouting “I’m not inviting you to my birthday party, so there!” as a form of retaliation over a trivial perceived slight. While there are no doubt a few teens and adults who behave almost as childishly, my kids are never going to hang out with them, because they abhor that sort mean-spiritedness.

The bottom line is that childish mean-spiritedness becomes much less prevalent and much easier to avoid when you’re no longer 5 years old. So I don’t think a bit of avoidance is such a bad thing at all. The schoolyard or the playground aren’t really Real Life. They’re rough places full of socially inept impulsive little people. Real Life is much easier to deal with in a lot of ways.