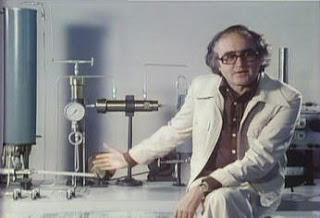 It was a typical Friday night in our home. After dinner we headed to the gym, which we had to ourselves again. The kids did all sorts of obsessive tallying of calories expended, played tag in the gymnasium, and got very pink and healthy-looking. Their parents sort of did likewise. Except that we probably looked worn out more than healthy. Whatever.

Then we came home and watched a Connections episode on DVD because, as Sophie said “Connections after gym is perfect.” We are loving these videos and are about half way through the first series. They’re quirky amalgamations of history, science, dry humour, classical music and historical re-enactments. The first series was aired in 1972, so there’s a certain datedness to it. Note the leisure suit. One priceless comment from tonight’s episode: “Computers are not just complicated adding machines.” Oh no?

But perhaps even partly because of its datedness, we love this series. Tonight we followed history from Ptolemy to Arab astronomy to astrolabes to gears and springs to watchmaking to telescopes to pendulums, through the Inquistion to glass furnaces to the steam engine, machine tools, factories, the steam engine, cannon-boring, the automobile and supersonic flight.

But even though the 1970’s style is endearing, we’ll be moving on to the two 1990’s series that follow. Perhaps not until next winter (our DVD habit being a cold-weather affliction) but we’ll get to the rest of these some day.