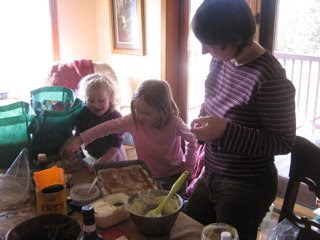 It’s been a long time since I’ve posted a “Day in the Life” entry. Here was today.

Erin was up first. This is exceptional. She enjoys being a night-owl extroardinaire, but she has an incredible ability to move her sleep time around as she sees fit and for whatever reason wanted to be up early today. She was working on the computer when I finished my shower and came downstairs to make coffee.

I made a bunch of phone calls cancelling our trip to Calgary that we’d planned for tomorrow. Alas an unexpected death and out-of-town funeral had taken our violin/viola teachers out of town on the one day this month that would have worked for Erin’s and Noah’s lessons. They’ll have to wait another month and Erin will have to go into the music festival without a March lesson.

Fiona was up by this point, and Sophie wandered out shortly after. Everyone got their own breakfast while I packed two boxes of food and kitchen tools. Eventually we awoke the family’s current reigning night-owl, Noah, in order to get to Kitchen Club.

Kitchen Club went to Italy this week. My older two kids are pretty lukewarm about kitchen club these days, but they warmed up a bit after we got to the other family’s place and the actual work got underway. Fiona, M. (age 3) and I started work right away on the tiramisu, since it needed to sit and soften for a couple of hours. Other groups worked on different courses. Noah worked mostly on the Tuscan Bean Soup, Sophie was in charge of dough-making for pasta and pasqualina and Erin chopped veggies for the ravioli filling and the pasqualina. Lots of organic parmesan cheese was grated, lots of olives and artichokes and garlic were chopped. There was great delight as we took turns working the manual pasta maker and its ravioli attachment. Somehow a lovely five-course meal was ready at 1 pm and we all sat down and enjoyed it together.

After dessert and dishes, we went outside to enjoy the sunshine and check on the animals. A year ago our friends’ animals consisted of a neighbour’s cat that would sometimes drop by for a visit. Now they have a pregnant dairy cow, a nanny goat and new kid, seven ewes (three pregnant) and a ram, three dogs, seven hens, two roosters and seven rabbits (one pregnant). The rabbits are the newest additions, and there was much adoring, petting and playing with rabbits.

When we finally got home I did a bit of work with our own chickens while the kids gravitated to the computer for a while. Noah made a folding umbrella using RigidChips. Fiona had a bath. I washed the kitchen floor. Erin and Sophie did their violin practicing. Fiona, Sophie and I made supper.

Then we went off the the gym. We had the place to ourselves and when that’s the case we quietly break the rules and the under-twelves are able to use the fitness machines. The kids got very pink and happy. They love counting calories on the machines to keep track of how much work they’ve done. Erin logged 400 calories, Sophie and Noah probably around 150-250. I showed Erin some simple exercises on two of the weight machines. The younger kids played a bit of informal badminton and basketball in the gymnasium. We spent almost 2 hours there.

When we came home we watched an episode of James Burke’s original “Connections” BBC series. We love these shows, which we’ve only recently discovered via Zip.ca. Noah commonly exclaims “I love Connections!” out of the blue in the middle of an episode. This program is right up his alley.

Afterwards there was a little more computer play. Noah and Sophie have been doing a lot of audio- and video-editing lately, trying to figure out how best to use the software they have at their disposal. Lots of silly creativity happening. But last night I think they were just playing Roblox.

I read a chapter from “Steel Across the Prairie” by Pierre Berton aloud to the kids. Then a chapter of Abarat by Clive Barker. We like the former but are finding the latter “too random” as the kids put it. But we’ll finish it. It’s entertaining enough to keep going, but not really our style.