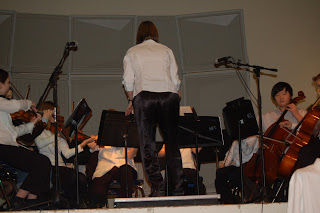 Today the community string orchestra performed at the annual Celebration of the Arts concert in one of the nearby communities where several of our members reside. The concert is a sort of moderately pathetic, though intermittently entertaining, community talent show. This year’s program was a bigger deal, because it coincided with BC’s 150th birthday, and the Arts Council’s 30th anniversary, so there was a bigger venue, a sound system, a colour parade and an emcee. The orchestra did really well, and the acoustics were not as awful as they’d seemed at first, the auditorium being a new venue for us. 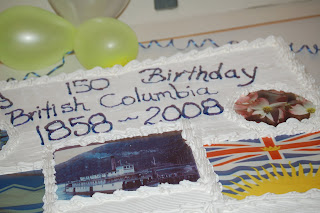 Fiona was our photographer (instructed to use the flash only during rehearsal, like any good audience member). She also took photos of the BC birthday cake, which she spent much time admiring and the whole three hours looking forward to.

Three weeks ago Noah said, almost out of the blue, “We need to learn more about Canadian history. We know a lot about world history, but not as much about Canada.” He’s right. The last time we did a big Canadian history jag he was five or six and most of it blew right by him. Coincidentally I’d just bought a set of trivia cards of Canadian history, so I popped those in the van for use on long drives. And I reached for a set of short books we’ve owned for years by Pierre Berton, intended for middle- and high-schoolers. “These are good,” I said. “I read some to Erin a few years ago. We could try a couple of them.”

I asked Noah and Sophie if any of the topics covered in Berton’s books appealed to them: arctic exploration, westward expansion, the War of 1812 or the Klondike gold rush. To my surprise they chose westward expansion. Not exactly what would have jumped out at me around age 10 as being the most interesting. It seemed like a fairly arbitrary choice and I wasn’t sure if the kids would connect what they were listening to to anything else in their lives. But we set off to Calgary with “The Railway Pathfinders” in our suitcase.

Suddenly, though, connections were everywhere. We read about Walter Moberly, the renegade surveyor for the CPR, the very day we had driven past Mt. Moberly and the Blaeberry River near his route choice, the Howse Pass. That night as we closed our eyes to go to sleep, we listened to train after train chugging by on the very CPR line we’d been reading about. On the way home we picked out more place names and landmarks we’d noticed in the book.

As I gathered a few more resources, we headed into the next of Berton’s slim volumes (now published in compilation form), about eastern European immigration to Manitoba. And the last two chapters were all about the Doukhobors, the Russian religious sect who eventually, after their Manitoba misadventures, ended up right here in our neck of the woods. Our community is full of Plotnikoffs, Chernoffs and Pereversoffs. The hospital where Chuck works was once a reform school for Doukhobor children whose families refused to send them to public schools, preferring communal home-based education instead. Connections were popping up everywhere!

And then today’s arts council concert turned into a trip through BC history, with the emcee sharing colourful stories from BC’s past as the performers and stagehands shuffled their way on and off stage. Howse Pass came up yet again. Many of the facts we’d puzzled over (and then memorized) on the trivia cards were mentioned. We felt smug and well-educated. To think that I had feared that this new foray into Canadian history would suffer from disconnectedness. I think Noah and Sophie chose exactly the right topic to begin with.

2 thoughts on “That ubiquitous Canadian history”