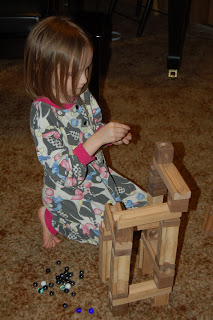 You’d think that with four creative unschooled kids and a parental penchant for buying educational resources we’d be overrun with toys, but we’ve actually done pretty well at keeping things to a minimum. I’ve culled and freecycled things that didn’t seem to appeal to the kids long-term, and been careful not to bring more into our home. Most of what we have are open-ended toys that have staying power. Basically we have the following:

Pattern blocks, the blocks and marbles set Fiona’s using in the photo, K’nex, Playmobil castle, SnapCircuits electronics kit, Brio train stuff and dress-up things. I confess there are a few stuffies around as well, though not many. And some SpeedStacks stacking cups. We have a fair number of family games and a few little things I haven’t mentioned, but considering that we’ve been at this parenting racket for over fourteen years and have both genders and a variety of personalities represented, our toy selection is actually pretty small.

I discovered early on that my kids were easily overwhelmed by too many choices. Once, before Fiona was born, we went on a family retreat to a tiny cabin in the snow. We were there for two days with no electronic entertainment and very limited space, and the only “toys” we took with us were some balloons and a few crayons. The kids have never played so well. They turned the stairs into a pirate ship. Balloons were treasures, and pets, and people, and balls. They enacted an hour-long story with a small strip of green paper and a crayon, one that had the three of them in hysterics. It was a very clear demonstration to me that less is more. With all sorts of toys and external amusements at their disposal, my kids are easily overwhelmed by the possibilities. They expect fun to happen to them, but often nothing feels quite right for them in the moment. With limited possibilities available, they dive in and make their own fun. The serious toy cull kicked in after that weekend.

I love the way these few toys we have come back and back to amuse and stimulate the kids in different ways over the years. The blocks and marbles set, for instance, is a balancing game and fine-motor exercise when the kids are very young. Later it becomes an exercise in logic and design, a physics playground that requires little tweaks depending on the momentum of the marbles, and, although it’s a large set, provides an exercise in the allocation of scarce resources to maximize height and length of the run. In between it has also served many other purposes. It’s been especially enjoyed as a violin-practicing counter-of-repetitions — build a run, and drop a marble in every time you nail the trill-and-turn at the end of the first Boccherini Minuet section.