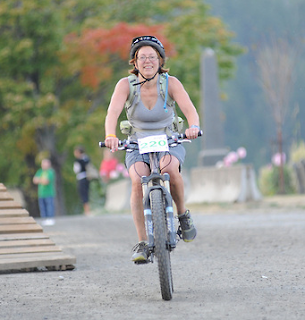 The bike ride was long and hard. The 45k included about 1400 metres of climbing. I was worried I wouldn’t finish before the course closed: a number of people didn’t finish, and a few sneaked in just past the official cutoff but were granted finishes. It was a hard physical slog for longer than I’ve ever worked that hard. Longer than my marathon. I finished in under 5 hours, though not by much. Official times have not been posted. But I’m told I came 3rd overall among female riders. Maybe there were only three women? There were about 40 riders but it seems most of them were male. 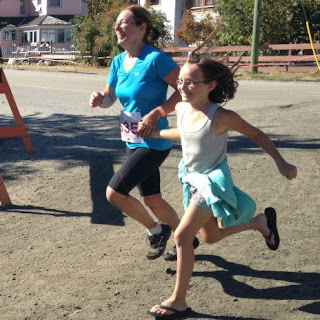 Surprisingly I felt pretty good once I had a chance to catch my breath at the end of the day. I had a scrape on my leg from a small crash but that was all. I went home, slept and got up for the run. Muscles still seemed happy enough to oblige.

The 25k run was fine. It had about 650 metres of climb and an equivalent descent. As expected my bones and gristly bits held up well and the next day I just had a pleasant amount of muscle soreness. I managed to shave about 5 minutes off my 2010 time, sneaking in under 3 hours. Two years older and 5 minutes faster, even after a huge bike ride: I’ll take it!

It was a really motivating weekend. Especially with respect to the bike. I have a decent amount of endurance, but I realized it would help to be a lot stronger when it comes to powering up hills. So there’s something to work towards for next year.

Next year I’d like to do the bike ride again. And I think I’d like to run the 10k with Fiona. She’s started running with me and would like to keep that up. There were an impressive bunch of kids running the 10k this year, and she would like to be part of that next year.