T minus ten days to the marathon. Because the training schedule I’m using has a short taper, and I further offset it by two days to fit my weekly schedule, I still technically have one more tempo run to do. But I’m going to scale back the intensity on it. Basically the hard work is done, and I mostly did the program as prescribed.

I re-installed Rubitrack on my MacBook to get some pretty graphs. The bars below show my weekly mileage (I’m only half done this week, so the right-hand bar will be bigger by Sunday). You can see my calf-strain break in the second week of March. The biggest week was 94 km, with most of my recent weeks ending up somewhere around 75 km. That’s not a huge amount of mileage for a marathon, partly because this plan included only four runs longer than 20 km. But what you can see very clearly from the colours is how much of my running is being done at higher intensities: yellow, orange, tomato and red. Those colours are all faster than my target race pace. The greens and blues are slower than my target race pace. Once you factor in that my warm-ups and cool-downs all lie in the blue/green range, it’s clear that there isn’t that much easy mileage in the meat of this training program.

That’s the flip-side of not doing a ton of long runs: mid-length runs are often higher intensity runs, and they aren’t flanked by rest days. Here’s a typical three-day stretch: a 12k set of strength intervals, followed by a slower (bluer) 9k, and then right onto a 16k tempo run the next day.

The logic here is that while I’m not doing long runs very often, the mid-length higher-intensity runs stack right up against each other without recovery time. This means that from a training standpoint my 16k on the third day works very much like a the second half of a long run. The principle is that cumulative fatigue thing that I mentioned before. It means you go out running, and hard, when your legs are still grumbling about what you did to them yesterday and the day before.

Reinstalling Rubitrack has let me look back on my training from 2012, when I ran the same marathon. It was a more conventional approach: it had weekly high-mileage runs, most over 26k, and only occasional faster workouts. So you see very little orange in these bars. And look at how long the taper was! It was only supposed to be two weeks, but I got bored and tired of the training and I gave up 3 weeks before race day. 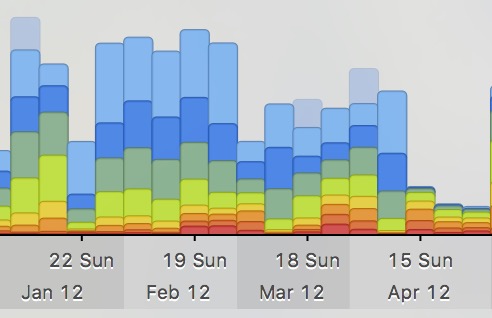 Who knows whether this will translate to results on race day. Anything could happen: I could get sick, or I could under- or over-hydrate, or have digestive issues, or the weather could be way too hot, or I could cramp up or get nasty blisters. But I would be happy, now four years older and well on the far side of 50, if I could better my 4:24 time from 2012. I think that’s definitely possible, and if all goes well I could cut quite a bit off. But I’m in it for the experience more than anything.