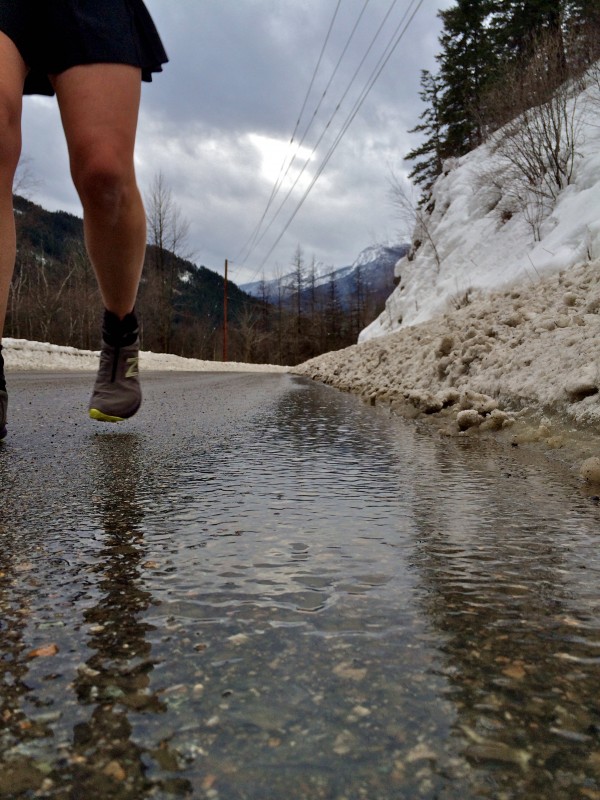 I run. Come rain or snow or slush or all three, I run. I have no particular goals. I have no races planned, I don’t track my mileage any more, nor do I measure my pace or keep track of how often I run barefoot, or how many days a week I run. I’d guess that on average this winter I’ve run about 5k a day, sometimes more, sometimes less, sometimes not at all. But usually I run.

It was almost exactly five years ago that I started making time to run. I’ve done a Half Marathon, a few 5 and 10k races, a Marathon and a couple of 25k trail races. I’ve usually placed pretty well, in the top 25% in my age-and-gender group, sometimes higher. But this year I don’t think I’ll be doing any organized runs or races at all. That’s just the way it’s worked out: there’s not much happening in the region, and what is available is at impossible times for me. Nor do I feel like spending hundreds of dollars, working out countless family-oriented logistical considerations and travelling hundreds of kilometres in order to test myself against someone else’s timer and a bunch of strangers.

I’ve had my share of injuries, that’s for sure. I suppose that’s the price I pay for jumping into running at age 45 after fifteen years of not doing any such thing. The first year I had a mysterious deep hip pain that kept me from running and carrying heavy objects for almost three months and then miraculously resolved. A year later I hurt my foot scrabbling about barefoot (not running) and had to quit running for a couple of months to let it heal. And the then I developed a waxing and waning discomfort in the area of my left achilles tendon that has kept up ever since.

I have never really been able to figure out what’s going on in my ankle, because it didn’t behave a lot like a tendinitis or a bursitis. So I finally sought out a physiotherapist with a special (barefoot-friendly) interest in running biomechanics. She found a few little things in my biomechanics that needed work (my left hip abductors were much weaker than the right, which was weird but consistent), and I had a lot of mobility loss in my ankle as a result of two years of favouring it. Eventually after a bit of bewilderment she decided I was possibly suffering from a tarsal tunnel impingement, sort of like the ankle equivalent of carpal tunnel syndrome. Whether she was right or not, the active release therapy she did helped a bit, the prescribed exercises drastically increased my strength in some of the stabilizing muscles, the ankle problems are currently mild and manageable, and they no longer seem to be significantly aggravated by running. So that’s good. I still hurt a bit sometimes, but it doesn’t seem likely that I’m doing damage by continuing to run on an occasionally sore ankle.

These days the stuff I use to run is as follows:

That’s all. No GPS, no stopwatch, no iPod or earbuds, no heart rate monitor. Not unless I’m on the treadmill.

Speaking of the treadmill, I’m so grateful for it. It’s boring as heck, especially situated where it is against a wall and a door in the dark basement, crowded in from all sides by paint cans, home repair stuff, Chuck’s various hoarded things, old sports gear and the bokashi bins. But I feel crappy when I don’t get to run, and on days when it’s too late or too gross or too complicated to get outside for a run, it’s a great substitute. I also think that being able to do ten- or fifteen-minute runs two or three times a day has really helped my ankle improve this winter.  Running outside is just a big enough production in winter to make it best-suited to runs of 30 minutes or longer.

Where am I going from here? Well, nowhere, really. I’m just going to keep running, doing what feels right from day to day. I definitely want to explore more of the amazing terrain in this area, whether by running, hiking or camping. And I want to continue to be able to move myself over long distances under my own steam, inspired by the wisdom of this quote from Born to Run:

One thought on “Five years of running”