There are two bits of magic involved here. The first is Zwift, a virtual cycling app running on my laptop. By riding stationary on a trainer in my basement with Zwift, I am thrust into a virtual world complete with sights, sounds, terrain variation and scenery, as well as other cyclists (all in their own basements, presumably). The app offers a data-geek’s playground of stats, challenges, logs, rankings, customizations and file-portability. I can ride for fun, I can draft in a peloton on a group ride, I can push myself through particular sprints or climbing challenges, trying to rank as well as possible against all the day’s riders, I can compare my PRs, run tests of Functional Threshold Power (shorthand for one’s maximal aerobic strength), take part in structured training workouts or simply sight-see. Most days the Zwift map puts me in the mythical Pacific island of Watopia, where I can choose from various routes and directions, anything from a fairly flat 10 km to an epic double mountain pass route of 72 km. Like on a real ride, I can turn back early, decide to take a different turn-off and change my route, extend a ride or quit part way through. I can wave at fellow riders, chat with them or cheer them on.

It all sounds pretty gimmicky and video-game-like, but as someone who has plugged through a lot of boring hours on her bike trainer over the past year and a half thanks only to daydreams and podcasts, the way this app transforms that experience is impressive. It takes you about 80% of the way from sweating and going nowhere in your basement to enjoying a real outdoor ride with a bunch of people. Even if I am planning to simply crank off some easy miles, even though nothing changes with respect to my bike which continues to spin on the level in the basement, I find myself pushing towards the summit of a climb and then dialing it back as I crest and start the descent. I huff and puff towards the finish line of a sprint, I try and keep up with likely-looking fellow riders. It’s almost dangerous: I often get lulled into pushing myself much harder than I need to, just because of the realism, the social aspect and the variability of the ride.

Zwift has been around for about 18 months and has evolved from a beta version with only a couple of tropical routes to an increasingly robust training platform with a variety of maps, including urban routes through London, UK and Richmond, VA. The worlds are only modelled on the real world, which allows the developers to create scenery and experiences in the realm of the fantastic. Ocean Boulevard takes you along a 2-kilometer submarine tunnel where fish and marine mammals swim around you. And yet the data files of a ride push through to Strava, the online log where I tally up all my miles, and look just like my real rides, complete with Google maps of the route. Yes, the Strava software engine has been talked into believing that Watopia is real.

I bought a third-hand CycleOps Fluid2 trainer last year for $100. It had a nice road-like feel, but unfortunately because my bike is a ‘petite’ bike with 650c wheels, Zwift wasn’t able to accurately estimate power (or actually power per kilogram of body weight, from which it generates somewhat-rider-equalized virtual speed on whatever terrain you’re on). I tried the beta version of Zwift when it was first being rolled out in 2015, and my smaller faster-rolling wheels confused Zwift into thinking I was faster and stronger than I was. The near-freezing temperature of the garage where I was riding at the time reduced the viscosity of the resistance fluid in my trainer, and further caused my power to be over-estimated. Normally I would have been content to simply work for relative improvements in my power and speed, not worrying about the absolute accuracy. But the social nature of Zwift meant this was problematic: on a moderate ride I could wup the yellow jersey off even the elite riders, and they weren’t all that impressed. They had worked hard for those jerseys.

Slapping a power meter on my bike would have got rid of the need for Zwift to (poorly) estimate power. But power meters are $500-1000. Yup, really. 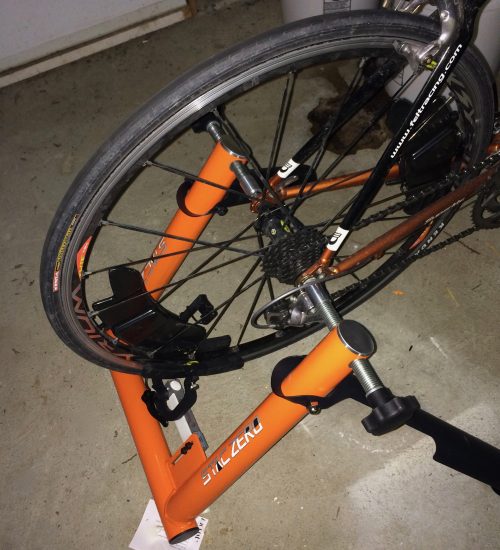 That’s where the Stac Zero comes in. My third-hand CycleOps trainer had two issues. It had been leaking small amounts of fluid, and it had caused a fair bit of tire wear. So when I saw a Kickstarter campaign and a glowing prototype review of the Stac Zero trainer, I jumped aboard and backed the version with the integrated power meter. The Stac, made in Canada, uses eddy current magnetic braking to slow the spinning of the aluminum rear wheel of my bike. This video shows the magnetic drag effect using electromagnets that are switched on to stop a swinging pendulum. In the case of the Stac Zero trainer, the pendulum is replaced by the rim of a bicycle wheel and the electromagnets with a bunch of always-on rare earth magnets. There is no contact between tire and the trainer, so there is no tire wear and no sound from the resistance mechanism. The only sound is that of my bike’s drivetrain itself. A no-calibration-needed power meter integrated into the trainer completes the set-up, transmitting to my laptop. Zwift gets accurate numbers, and puts me properly in the back half of the pack where I should be.

It is so quiet that it doesn’t matter that I’ve put it in the basement right beneath Fiona’s bedroom. For me that beats the garage: it’s warm enough for my laptop and cool enough for me. And Fiona doesn’t even hear it.

Unlike almost every other Kickstarter project I’ve backed, the Stac delivered on time. That was a pleasant surprise, and it helped propel me out of the depressing spiral of inactivity that has plagued me this fall. I’m supposed to be training for the Boston Marathon but my knees have been inflamed for mysterious reason and the swelling, by pushing tendons and ligaments out of alignment, is producing pain whenever I run. Boston may or may not be off the table in April, but at least with the bike trainer to play with in New Denver and the Nelson Nordic Ski Club tracks to ski in during my time in Nelson, I can stay fit and active.

Zwifting on a Stac Zero

9 thoughts on “Zwifting on a Stac Zero”