It was an early summer. The trees were greening up a good 3-4 weeks earlier than usual, and the season continued to unfurl early. The lake got “warm” (as warm as it ever does) in June. The wildfires were burning by the end of June. The huckleberries peaked in mid July. The wildflowers up Idaho peak were over before August began. And here it is September 2nd and the ‘late’ apples, pears and prune plums are ripening, the rains have socked in and the leaves are turning.

And there has been a lot of water under the bridge. My mom came to visit. She’s really struggling with her rheumatoid arthritis, but a bit of prednisone helped take the edge off while she was here. She was able to be here when Erin performed a repeat of her grad recital locally. It was wonderful for us all to hear the maturity her playing has these days. She played the Debussy Sonata, Beethoven Sonata No. 7 and the Bach C Major solo sonata. She and I did the Symphony on the Mountain gig together in Kimberley. Kind of fun, and nice for me to get back to doing some symphony playing.

Fiona changed violin teachers. Although she really liked her previous teacher as a person, maybe the relationship was too casual: she just wasn’t feeling the drive to impress her, and maybe there was some trust lacking as well. She has had three lessons with the new teacher, and has said “She’s a little bit intimidating at first, but really nice, and she’s seasoned. You can tell she really knows what she wants, and how to explain it to me.” The new teacher is the one Erin went to for part of a year, who had to suddenly stop teaching when her husband got cancer. He’s well now, and she has returned to teaching in a very limited under-the-radar fashion. Fiona is one of three or four regular students she has. So far so good. We’ll get properly underway in a couple of weeks.

There has been physiotherapy. It has gone well. The tendons healed. The strength and flexibility have been very much compromised, though. There were several therapy sessions and lots of daily exercises prescribed. We had to drive to Spokane to get new pointe shoes and she’s now beginning some re-training exercises en pointe at home. She’s signed up for three two-hour days a week of ballet this year. Hopefully she’ll know enough to avoid pushing too hard as she comes back from this. She’s young and they start the year gradually: she’ll probably be fine. Gymnastics may be harder to approach as carefully.

I started building a city bike, rehabilitating the Stumpjumper I bought in 1989 to try to get a couple of years of life out of it toodling around Nelson. I figure the mountain-climbing gears will be essential climbing 10% grades with payload. Eventually I hope to get an e-bike, but that’s hard to justify now when most of my travel is to transport kids.

Fiona wasn’t able to do dance camp, but she ended up being the teacher’s assistant at both the Music Explorers and age 6-11 dance camp. She was amazingly hard-working, helpful, pro-active and mature. Put in long days … up to 6 hours straight without any real break, herding children, helping with activities, doing prep and clean-up, redirecting problematic behaviour, supervising for safety.

Sophie and Noah have spent most of the summer in Nelson at the Mill St. house. Sophie has been working full-time at a café. She’s taken up longboarding. She’s got herself a twice-weekly paper delivery route. She shops, she cooks, she cleans, she’s been taking a Spanish course. She’s a maniac hard worker. Noah has spent much of the summer getting cold after cold, and when not sick playing D&D with his Nelson friends until the middle of the night. He’s also done some renovation and cleaning work on the Mill St. house. Spackling, washing everything with TSP, painting, carpet-underlay scraping, all that fun stuff.

SVI happened. It was over-the-top busy for me. Delegation is not my strong point. But Erin and Fiona were very helpful, and overall things ran smoothly. We had 95 students this year, the most ever, and with my grip on a local team of volunteer-parents slipping away now that I don’t teach locally, I struggled even more with asking for help. I managed to delegate one area, with rather less success than might have been due to my inability to relinquish control, but there is plenty of “room to grow” as they say. 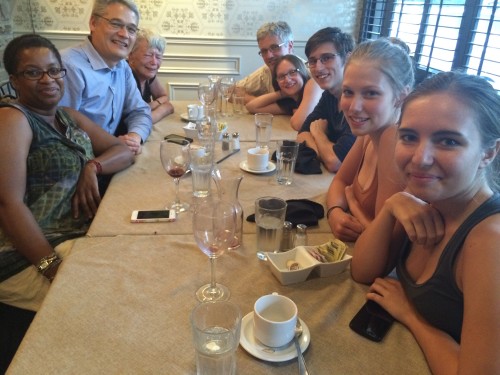 We went to Ontario to visit my family and Chuck’s family. All six of us went, a miracle of planning and lucky timing. Erin was completing a Suzuki teacher training course in Waterloo, so we intercepted her there and managed visits here and there.

I biked as much as I could. The new bike has been fabulous. I got much stronger over time and decided there was no need for a bigger sprocket or smaller chainring. I just bought a used trainer, a Cycle Ops Fluid 2, and plan to keep riding in the garage even through worst of the fall rains and winter conditions. I have my iPhone rigged up on the aero bars for reading books. Also in the plans is a two-day Silvery Slocan bike ride, from one home to the other and back again. 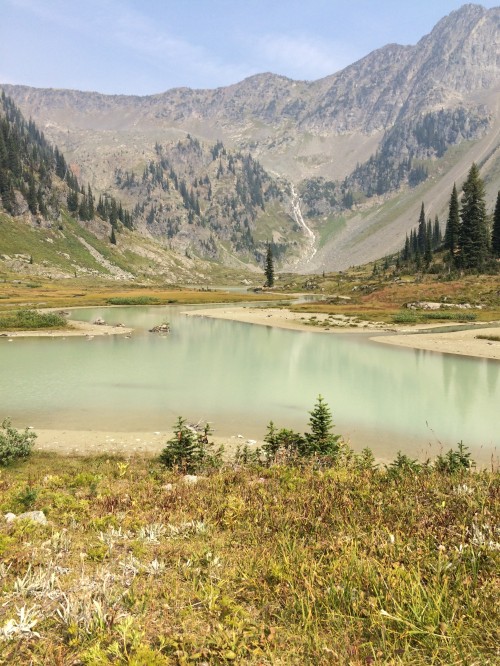 And there’s been a bit of trail-running and mountain biking and alpine hiking. Not as much as any of us wished, but Fiona’s limited ambulatory capacity has put a bit of a crick in our style.

But there: that’s some of it anyway. And so we move onwards into fall.